Patient of the Month 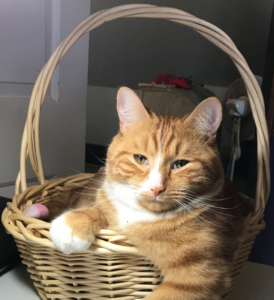 Meet Copper, the handsome 6 (ish)-year-old cat owned by Martha Johnson of Enfield, CT. While his indoor cat days are filled with squirrel/chipmunk/bird watching, attempts at stealing the butter, and many many cat naps, he did find a few moments to share his story with you.

Copper and his littermates were living outside in a small town in Vermont – part of a group of somewhat feral cats that were thankfully being taken care of by a kind woman trying to manage the colony. (Reminder to spay/neuter your cats!) Copper had a few struggles in his early life, most significantly malnutrition which impacted the development of his front legs (another reason to help manage your local outdoor cat population!) Copper’s story took a turn for the better one Christmas morning when he sauntered right up to Martha, climbed up her leg, looked at her adoringly, and the rest was history.

Copper had to visit his friends at Suffield Veterinary Hospital this summer though for a urinary obstruction. While initially Martha just noted that he was heading to the litter pan more frequently, it soon became apparent that he was straining and in pain because he just couldn’t urinate at all. In female cats, urinary bladder issues are uncomfortable and often lead to urinating outside the box, but in males the condition can be fatal. The male cat urethra is so narrow that any extra crystals, grit, mucus or blood clots, all of which can form during inflammation, can plug them up completely, leading to toxins building up in the system, kidney failure, and intense pain. Under anesthesia, Copper was carefully catheterized to relieve the obstruction and have the debris flushed out until urine was able to flow again. While the worst was over, the rate of recurrence in the first week is high, so Copper was under close observation for several days.

Today Copper is feeling 100% better thanks to a special diet to manage his urinary health, lots of water, and a few extra snuggles each day! You can find Copper chasing his favorite ball around the house (the best time for this activity according to Copper is 3 a.m.), chattering at the birds on the deck, and showing love and kindness to anyone who crosses his path (particularly if it’s close to dinner time!) For giving us a chance to remind cat owners to watch out for the potentially deadly signs of urinary disease, we are pleased to name Copper as the December 2021 Suffield Veterinary Hospital Patient of the Month.