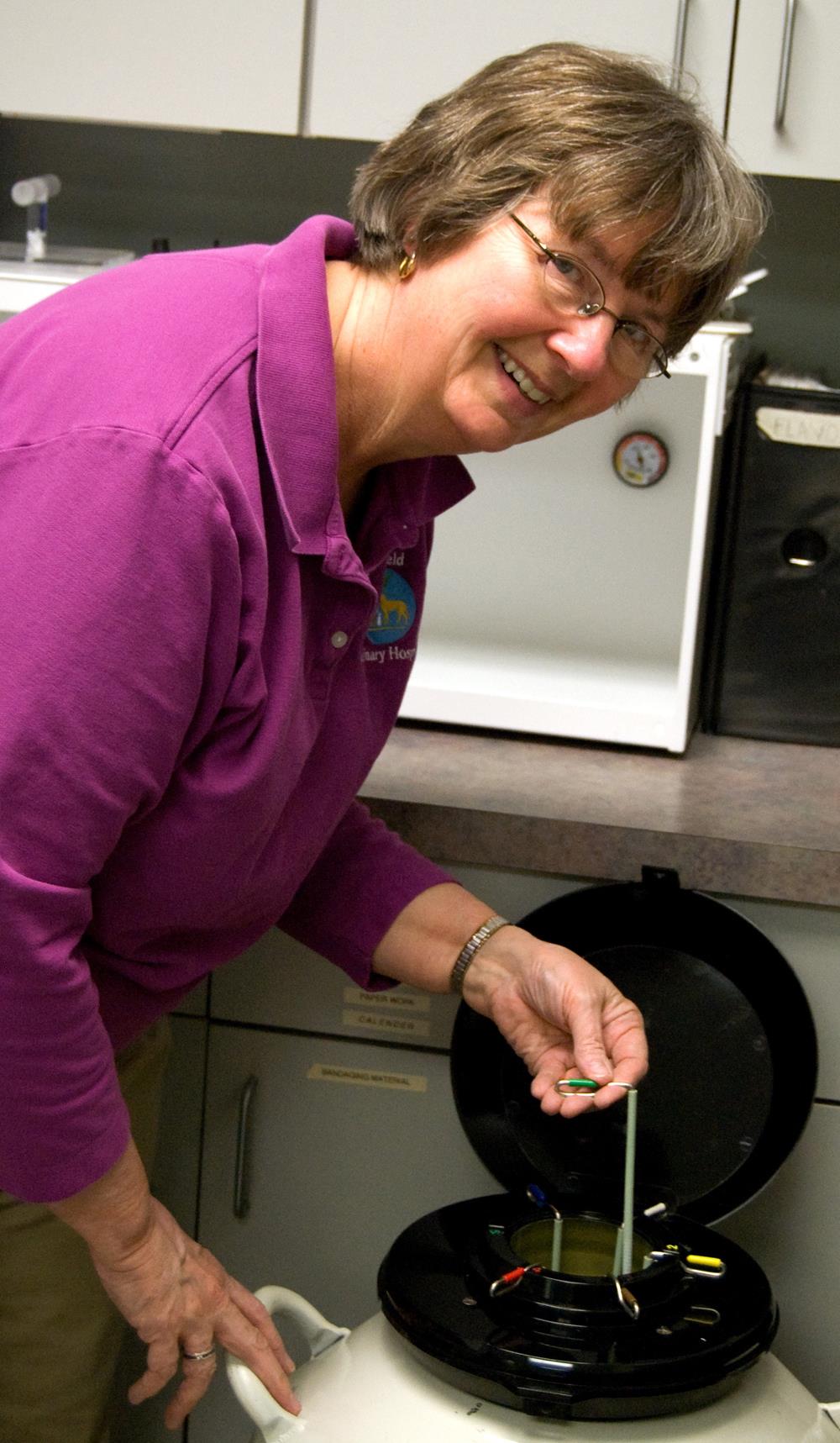 Ann Louise Huntington was born in Seattle, WA, and grew up as a “Navy Brat” living in places such as Brooklyn, NY, San Francisco, San Diego, Fairfax, VA, and even Japan. A self proclaimed “City Girl”, Dr. Huntington considers Brooklyn, NY to be her hometown. In 1966, Ann graduated High School, and then went on to college at UPenn. After receiving her degree in 1970, she went on to work at a marketing firm on Madison Ave. in New York City.

One day, while speaking on the phone with her Father, she was told of an incident that involved bringing their family pet to a Veterinarian. What was abnormal about this was that the Veterinarian was a woman; something virtually unheard of at the time. The seed was planted, and not long after Ann decided she was ready for a career change. She went back to school, attending Binghamton State College in Binghamton, NY to take college Science courses. In 1973, she enrolled in Cornell University’s program for Veterinary Medicine. Four years later, in 1977, she officially became “Dr. Ann Huntington”, receiving her Doctorate in Veterinary Medicine.

While working in Cheshire, CT, Dr. Huntington and Nick lived in Longmeadow, MA, which made for a lengthy daily commute. With their first child on the way, the couple started to look for a Veterinary Hospital they could call their own, as well as one that was much closer to home. After narrowing the field down to two hospitals, one in Monson, MA and the other in Suffield, CT, the couple made their decision. In June of 1983, Dr. Huntington and Nick purchased Brocket Animal Hospital and changed the name to “Suffield Veterinary Hospital.”

In October 1983, their first son, Brett, was born. Not long after, Nick quit his job as an Aerial Photographer to take over as Practice Manager of Suffield Veterinary Hospital. In 1987, the couple’s second son, Jared, was born.

Since those early years, Suffield Veterinary Hospital has grown to become a modern, five Doctor Practice, with a total staff over 30. Because of Dr. Huntington’s focus on Canine Reproduction, Suffield Veterinary Hospital is one of the largest canine reproduction hospitals in the Northeast, with many dog owners traveling hours for her knowledge and services. Dr. Huntington has also established SVH’s role in providing much needed services to Non-Profit organizations such as Protectors of Animals,Yankee Golden Retriever Rescue and 3 Bunnies Rabbit Rescue.

Aside from her life as a Veterinarian, this “City Girl” is very involved her quiet town of Suffield. She has held the title of Town Water Commissioner, and was elected to the Suffield Board of Finance in November of 2015. She has also been involved with the town’s youth soccer league since her children were young enough to play. Dr. Huntington is heavily involved in the Labrador Retriever Club of the Pioneer Valley, a regional dog club that Nick started years ago. Dr. Huntington also gives back to Cornell University, which made her career possible, as a member of the Dean’s Advisory Committee.

Dr. Huntington proclaims that she has the “best job in world”, both being able to care for animals in need, as well as being able to provide employment for more than 30 people that live in the community which she loves so much. 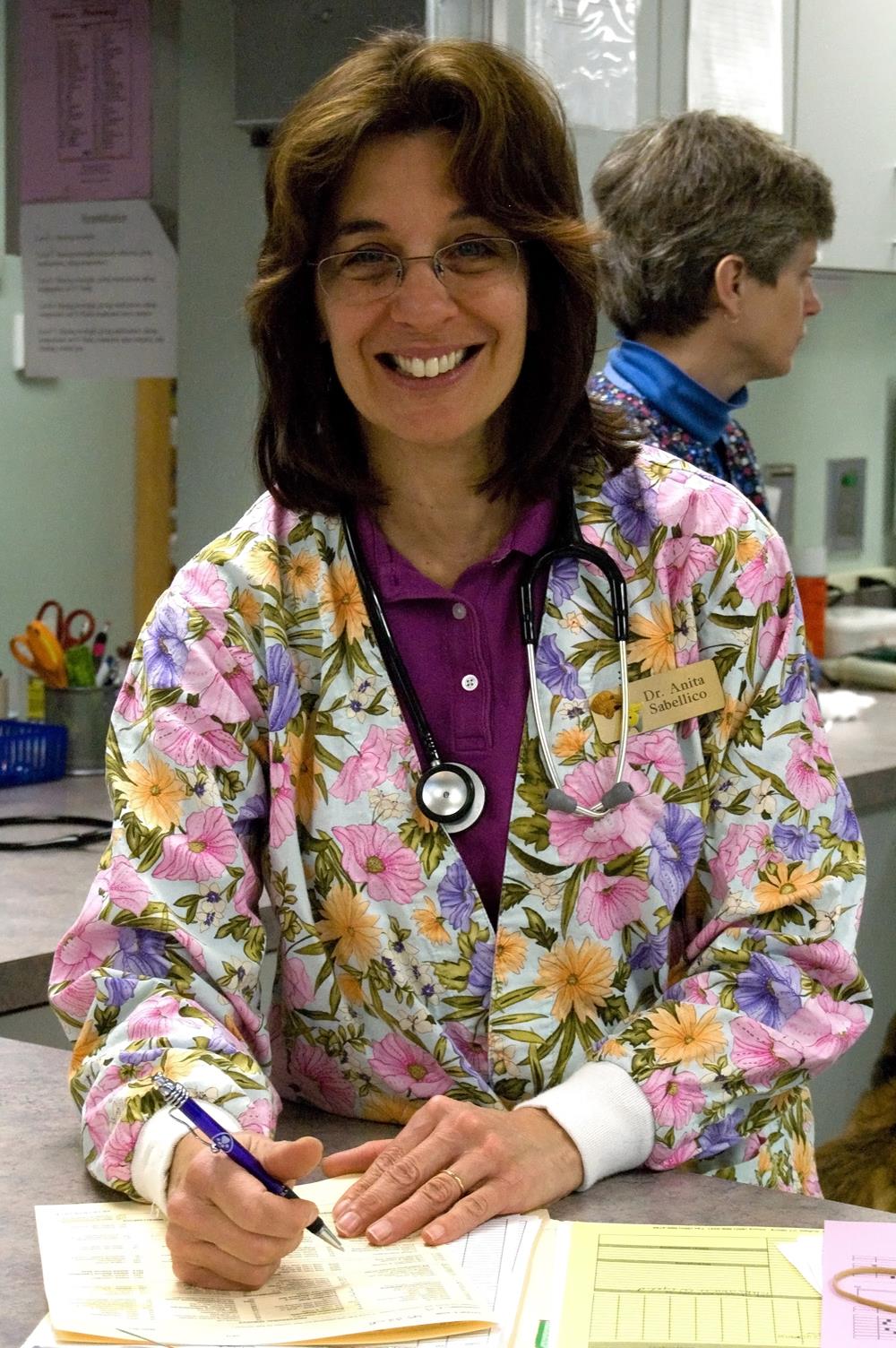 Dr. Anita Sabellico joined Suffield Veterinary Hospital in 1987. Dr. Sabellico was born in New Haven, CT and graduated from St. Mary’s High School. It was during her time in high school that she first decided to pursue veterinary medicine as a life long career. Dr. Sabellico then went on to Quinnipiac University where she received her bachelor’s degree in biology and laboratory animal technology. After undergraduate study, she went on to work as a veterinary technician in a multi-doctor small animal practice and then moved to Boston where she held veterinary nursing and research positions. She was responsible for many dogs, cats, small mammals, primates, and livestock at Tufts New England Medical Center and the Harvard School of Public Health. She attended Tufts University where she ultimately received her doctorate of veterinary medicine in 1985.

As a clinician at Suffield Veterinary Hospital, Dr. Sabellico has continued to pursue a special interest, not only in cats and dogs, but pet birds, rabbits, guinea pigs, rodents, and wildlife as well. In her spare time, she practices Parelli Natural Horsemanship with her thoroughbred, “Mouse”. In the summertime, Dr. Sabellico, her husband Marc, and her two sons, Chris, and Will vacation in Casco Bay, Maine. Where they enjoy boating and hiking with their family dog, “Hudson”.

Dr. Sabellico’s favorite aspects of her job include problem-solving, the mental and physical excercise required in her occupation, and sharing a relationship with owners and their pets. She states “No day is ever the same, and I am very lucky to love what I do.” 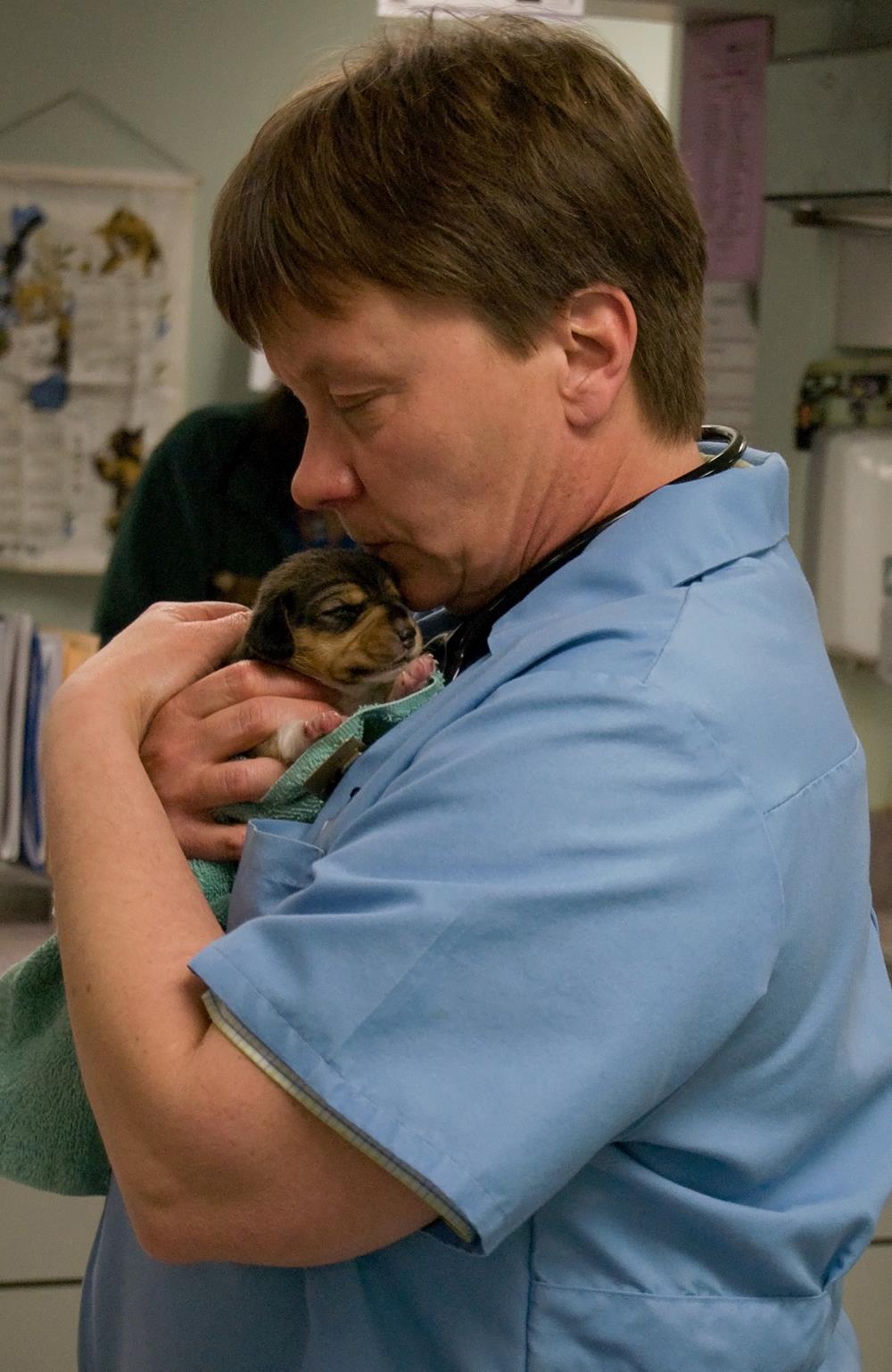 Dr. Dawn Burke joined Suffield Veterinary Hospital in 1999. She grew up here in Suffield and graduated from Suffield High School in 1976. She then went on to attend William Woods College in Missouri, where she received her Bachelor’s degree. It was here, during her freshman year, that she decided to pursue veterinary medicine. She then enrolled in the University of Missouri where she ultimately received her Doctorate.

In her spare time, Dr. Burke enjoys spending time with her two Golden Retrievers, Trace and Grissom. She shows her dogs in Breed Obedience, Field and Dock Diving. She is an active member of the Yankee Golden Retriever Rescue, and also enjoys skiing and fishing. When asked what her favorite part of being a Veterinarian is, she says she enjoys all the interesting people and pets that she gets to meet. 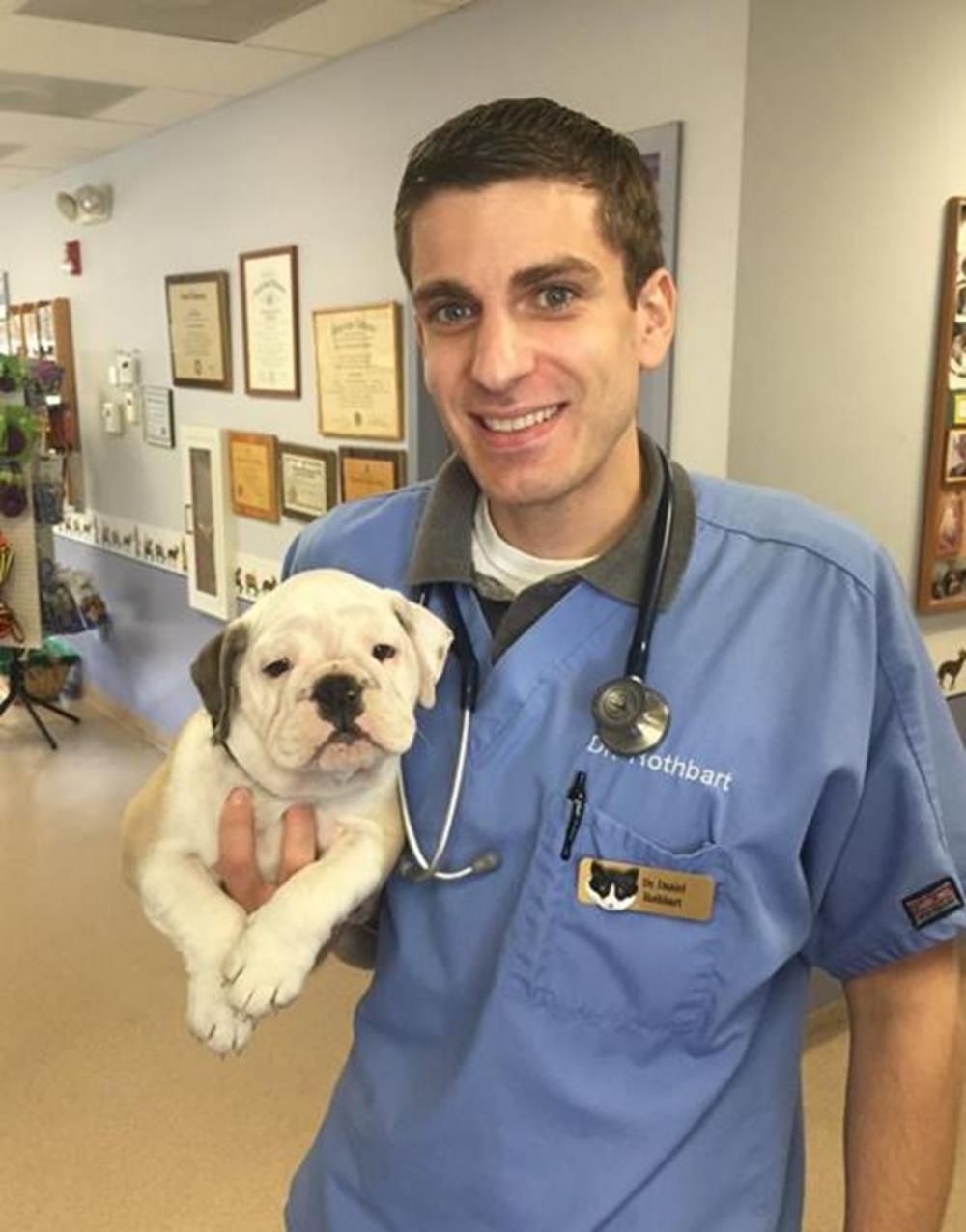 Dr. Daniel Rothbart joined our staff in 2014, and has made a very positive impact. He grew up first in New Jersey, then moved with his family to Framingham. From Framingham to UMass Amherst, he then became a 2013 graduate of Tufts University School of Veterinary Medicine. In June of 2014, he completed a year-long rotating internship in small animal medicine and surgery at Veterinary Specialists of Connecticut in West Hartford. While we were not actively seeking to add another veterinarian to our staff at this time, his endorsement by their director of interns was so glowing that we snapped him up.

In his spare time, Dr. Rothbart enjoys the outdoors by hiking and running. He and his wife Sarah share their home with their son, two cats named Mortie and Earl, and bulldog named Harvey. We think it is courageous of him to join our staff of over 30 women and only 1 other man! 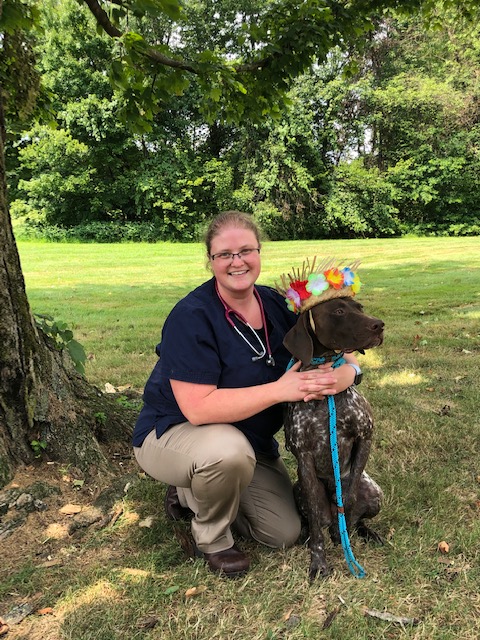 Dr. Emilie Laston joined our group in August of 2019. Emilie was born and raised in Vermont, being active in their 4-H community, even owning horses up until she went to college.

Dr. Laston attended her undergrad at the University of New Hampshire Durham, then went on to study at Atlantic Veterinary College/University of Prince Edward Island in Canada! She began her journey in a large animal practice but is quite pleased with her decision to switch to small animal medicine. She has a special interest in reproduction, dentistry, geriatric medicine, and Behavior.

Dr. Laston made the move to Connecticut in 2014. She is owned by 4 black and white cats named Herriot (the matriarch), Flynn Rider, Nathaniel (whom she raised from bottle feeding), and Princess Winnifred (a feral with an affinity for reigning under the couch).

Dr. Laston also has a German Shorthaired Pointer, Henry, and they compete together in numerous AKC and UKC Conformation events. These events include trick dog, rally, and starting agility.

When she is not doing any of the multitudes of things listed above, she enjoys gardening and caring for her house grounds.

Dr. Laston has expressed that she is very excited to get acquainted with our amazing SVH patients and clients! 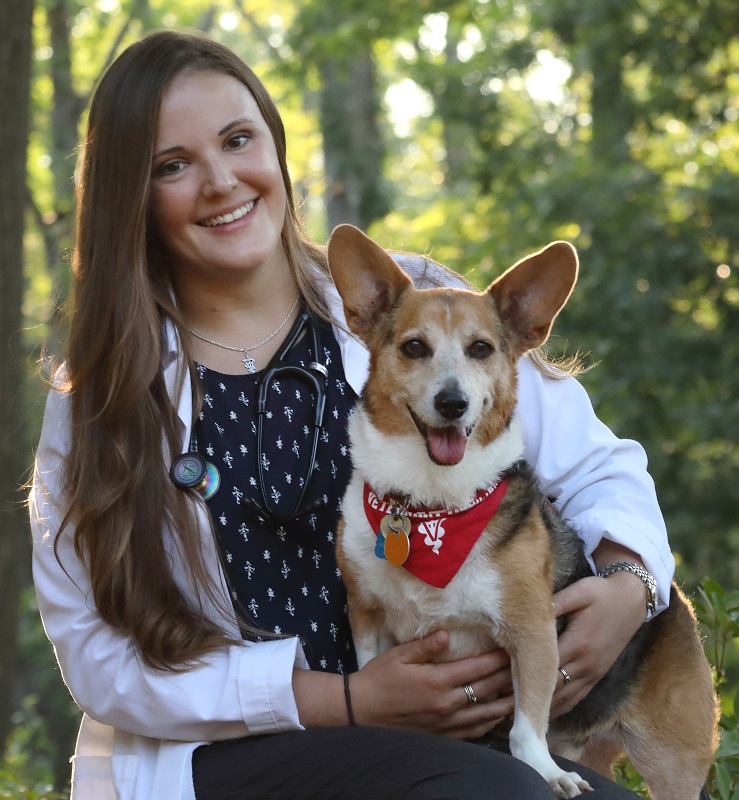 Dr. Emma LaVigne joined our practice in September of 2020. Emma grew up in Simsbury, CT and knew she wanted to be a veterinarian by the time she was 5 years old. Her passion for animals and love of learning and science made veterinary medicine an easy career choice, even though the achievement of this goal was anything but easy!

Before Dr. LaVigne went to veterinary school, she worked part-time as a technician at Suffield Veterinary Hospital and is excited to be back home doing what she loves as a doctor! Her special interests include internal medicine and ultrasonography, soft tissue surgery, emergency, dentistry, behavior, pain management and end-of-life care. The existing SVH staff knows Dr. Lavigne as smart, compassionate and fun to be around — a perfect addition to our family.

Dr. LaVigne looks forward to the opportunity to develop trusting relationships with her patients and clients and colleagues, just as we look forward to all the wisdom and experience she brings to our practice.

Accessibility by WAH
Call Us